Fun Things to do Around Naas While Staying with Us! 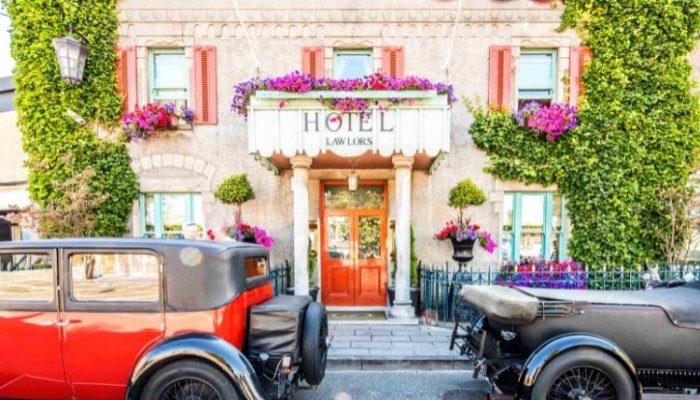 Fun Things to do Around Naas While Staying with Us!

Naas is a charming little town and a popular weekend getaway destination for many. Between golf courses, racecourses and gardens, there are surely many things to do in Naas to keep you entertained! We have compiled a list below of our favourite things to do while staying with us here at Lawlors of Naas!

Russborough House, just a 15 minute drive from Naas Town Centre, is a stately house owned and operated by the Alfred Beit Foundation, a private charitable organisation and is situated near the Blessington Lakes in County Wicklow, Ireland. It is regarded as one of the finest great houses in Ireland as it boasts of a collection of paintings, furniture and decorative arts inside this magnificent house surrounded by demesne landscape, gardens, and ancillary buildings.

Naas Racecourse is a horse racing venue in Naas.The course stages both Flat racing and National Hunt racing. Formed in 1922, Naas Racecourse hosts 18 race meetings as well as events of all kinds including family fun days, summer BBQ evenings, live music from time to time and ladies days on race days throughout the year.

Coolcarrigan is a ‘hidden oasis’ on the edge of the Bog of Allen, with a magnificent 15 acre garden full of rare trees at the end of a long avenue. Coolcarrigan House is an Georgian house built in the 1830s and was originally used as a shooting lodge, it is perfect for an afternoon stroll.

On beautiful landscaped grounds, Kildare Village is the perfect luxury shopping destination, just 15-20 mins from Naas. There are over 100 boutiques from designers like Levi’s, Mulberry, Polo, Armani, Calvin Klein, and many more - all offering up to 60% off retail price! There is a fab Italian restaurant that offers breakfast and lunch along with Starbucks.

The Curragh Racecourse or just simply ‘The Curragh’ -- is one of Ireland's most well known Thoroughbred racecourses. It is situated on the Curragh plain in County Kildare, between the towns of Newbridge and Kildare - just 15 mins from Naas Town.

The Moat Theatre is a theatre and arts centre based in Naas. It has been described as ‘A little theatre with a big heart’, it holds various events year round such as: Art, Comedy, Drama, Musicals, Drama Lessons, Summer Camps, workshops, weekly Country Market and monthly Art & Craft Market - all under one roof.

McCauley Place is a popular meeting place for the people of Naas. Open from 9am to 5pm Monday to Saturday, the Convent Tea Rooms offer a tasty breakfast, lunch, or just a snack. The Community Centre at McAuley place is a spot where people gather for various social events or recreational activities.

The Arts and Culture Centre that is there now was once a Nuns’ Chapel in the convent building at McAuley Place. The inside walls and ceiling have been restored and the original organ returned to its former glory.

Punchestown Racecourse, established in 1824, is located just outside Naas Town. It is a famous Irish racecourse as the April festival sees the culmination of the National Hunt season and attracts some of the best horses from across Europe.